Proof the yeast by stirring it vigorously with warm water and sugar in a small bowl (water ca. 37-45 degrees Celsius). Cover the bowl with a towel and leave it for up to 10 minutes until it has a frothy top.

Mix the yeast with all ingredients other than the flour. Sift in the flower while mixing - making sure you don’t work the dough too hard or too long or you will struggle to make it rise later. Cover bowl with towel and leave in a warm place (no drafts) to rise to twice its original size. Rule of thumb is to leave it to rise for max 3 hours. If it still hasn’t risen your yeast was probably “dead” before you started or you used too hot water to proof it thereby “killing” it. Divide dough into about 25-35 pieces depending on preferred size.

Roll each piece into to a smooth bun shape. Sometimes we make them into knots instead of plain rolls by rolling strips of dough and folding them into a knot (see photo below). For a flavourful twist, we sometimes flatten the the strips with a rolling pin and spread a mix of garlic and butter on them using a brush. Then we roll up the strips and shape them into knots again (see photo).

Place rolls/knots on a greased or non-stick baking sheet. We like when the rolls/knots batch or rise to touch each other so place them quite close together. Cover with a towel. Preheat oven to 250 degrees Celsius. For second rising, leave them for at least 30 minutes in a warm place (no drafts). Brush the rolls with room-temperature milk and bake in the middle of the oven for 8-10 minutes until light brown.

Enjoy, and keep in mind that these can be frozen for future enjoyment…

Spreading garlic/butter mix on dough - before tying them in knots! 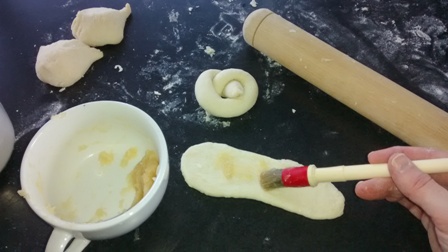 The only knots left the next day… 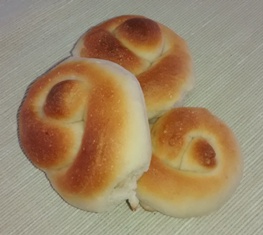 This weekend we wanted to have a ploughman’s lunch in stead of dinner. We were trying to save space for Thanksgiving-level eating the rest of the weekend (Happy Thanksgiving, Canada!). Our neighbour brought the cheese and wine and we supplied a range of cold sandwich meats, smoked salmon, and various vegetables. The final item was bread…. so why not make a damper, we thought. We dug out the first damper recipe we got while living in Australia. It isn’t very authentic as the stockmen in the outback would not have carted around potatoes, butter or Italian herbs. It is also unlikely that they would have had access to milking cows. How about milking camels? (ho-hum):

Preheat oven to 220 degrees Celsius. Mix flour, herbs, salt, and pepper. If you didn’t use butter/margarine to make the mashed potatoes, use your hands to rub the butter/margarine into the flour mixture. Stir in the mashed potatoes and enough skim milk to make a sticky dough. Use hands to knead the dough until it is smooth. We often make it round and cut two 1.5 cm deep cuts in it to divide the loaf into 8 pieces before baking.

Bake at 220 degrees Celsius for 10 minutes. Turn down the temperature to 180 degrees Celsius. It is a good idea to let the hot air out to cool the oven quicker. Bake for 30-35 minutes. Tap the bottom of the loaf. It is done if it sounds hollow. Let the loaf rest before cutting. Cut into wedges and serve - for example with a ploughman’s lunch.

Here is a before photo: 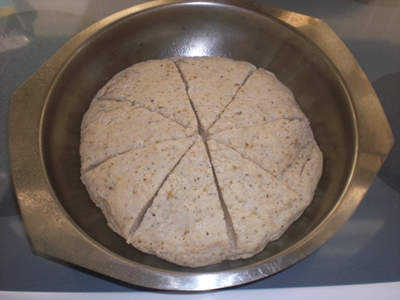 And as usual we forgot to take the after photo and there was only one small wedge left: 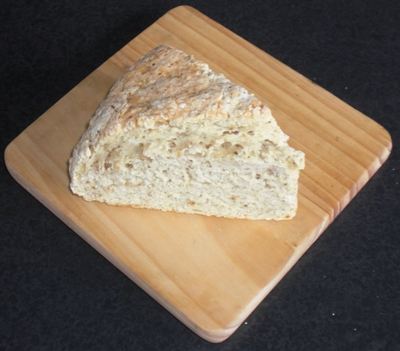 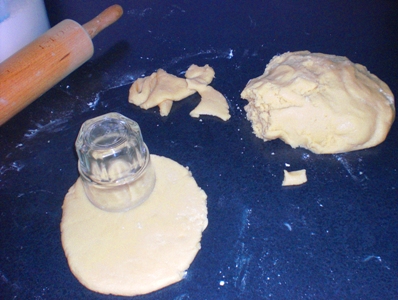 Mix yeast, some sugar, and a little luke-warm water in a small bowl.  Leave this to stand until it becomes frothy.  Mix flour, cardamomme, and sugar in a bowl.  Add melted butter, 3 dl of the luke-warm milk, and the yeast mixture to the bowl. Mix well and add more milk or flour until the dough is firm but still a bit sticky.

Leave dough in a warm place with no draft for at least 30-60 minutes until it has risen to twice its size.

Use a rolling pin to roll out the dough to a layer that is as long as you want the Kringle to be and less than 1/2 cm thin.  Spread some soft margarine/butter spread and sprinkle sugar cinnamon and raisins.  Roll the dough as shown on the photo and place it in a circle on the baking sheet.  Starting at one end, use a pair of scissors to cut 1-2 cm wide wedges and fold to the left and right all around the circle to make the garland pattern.

Leave the Kringle to rise for 30 minutes then brush some milk over the surface.  Bake in the middle of the oven at 190 celsius for 30-40 minutes. Once it has coooled down, brush a thin layer of icing over the Kringle. - then enjoy!

Janet (Hild’s mum) keeps telling us that left-overs keep really well in the deep freezer and a short time in the microwave does the trick when you need a snack one day.  We, however, have no idea if it works because we haven’t had any left-overs yet!!

Photo: Rolling out the dough…. (Doing it again, I would have rolled it thinner/wider to get more cinnamon-swirls in the final product) 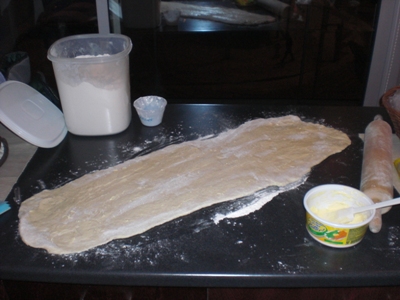 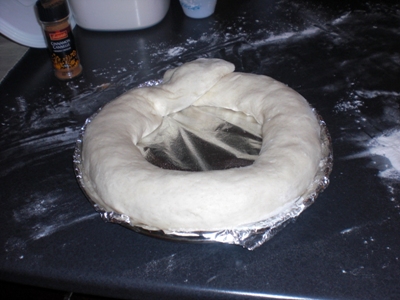 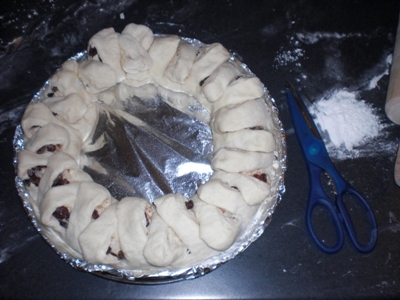 Sorry - no after-baking photo as we ate it before we got the camera out!

Initially our plan was to make calzone pizza, but then we remembered last time we made those. We made way too big calzones and ate them all…. piglets. So here is an option for a smaller dinner - maybe…

We like to not fill 2 horns and keep them for “afters” so - Filling for 4 horns (use whatever you’d like):

Follow the directions from ‘SkulebrÃ¸d’ until the dough has risen once to approximately twice its original size. Divide the dough in two halves and roll it out. Cut three triangles from each half. Put some ham, pineapple, pepper, and cottage cheese at the wide end of each triangle. Fold the corners of each triangle around the filling and roll it up toward the pointy end of the triangle.  [I know that this is cryptic - but the end result should look like a horn…]

Put the horns on a baking tray covered in aluminium foil and/or sprayed with oil. Cover the horns with a tea-towel and leave them to rise another 10-15 minutes. Turn on the oven and set it to 225 celsius. Bake the horns for 20-25 minutes in the middle of the oven.

Before serving, leave the horns on a rack to cool down. We ate them too soon and burned our mouths.

[This is where I would have added before- and after-photos, but the shutter speed on our camera is no match for Rob’s hunger. The horns were all gone before I could get a photo…. see: here is the empty plate!!]